Serbia and the region, while ecological stoves, primarily those on
pellet, are in the highest demand in the most developed countries. If
state measures were stimulating, as is the case in many European
countries, their sale could increase in our country as well, they say
at the Milan Blagojević factory, writes Milica Milovanović for Biznis
i Finansije (B&F). 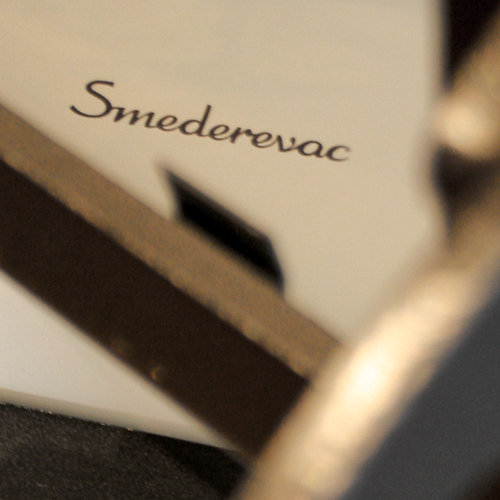 The Milan Blagojević factory of Smederevo (MBS), a member of the Inway
group, ended last year with a growth of sales on domestic turf and
abroad, so that the business profit increased by 38 percent compared
to 2010, while the income, at the same time, jumped by 33 percent.
This year, they are planning to export 10 thousand appliances more on
foreign markets and to exceed the business profit from 2011 by 50
percent. We discussed with MBS director Sofija Stančić the
rejuvenation of the famous “Smederevac”, the plans for our old
machines at the factory to be joined by a robot and about how the
company manages to collect all its claims within the set deadlines.

B&F: What was crucial for the successful sale even during the time of
the crisis and what do you base your even more optimistc plans on?

Sofija Stančić: Our success lies on the sale on foreign markets. In
2011, we managed to achieve in that segment a growth of sales by 16
percent compared to the preceding year, with six thousand more
appliances that went to 25 countries. We have a very small profit on
the classic program of the “Smederevac” which is faring well on the
domestic market and in countries of the region. The biggest turnover
and profit is brought in by the exports of modern, exclusive
appliances that meet the strict technical and ecological standards and
which we can sell in Germany, Switzerland and Austria. It is due to
this that we have good business results on those markets.

B&F: How much has been invested in the development and modernization
of MBS?

S.Stančić: From the privatization in 2005 to the present day a total
of 10 million euros have been invested. After the Inway group took
over MBS we had a very difficult period of a reorganization which all
of us would like to forget as soon as possible. Nevertheless, we were
resolved to create a stable company with an adequate number of workers
– there is currently 340 of them – which has a production, a market
and the possibility of regularly paying its employees, and not keeping
1,300 workers and then closing down the factory tomorrow. At the
moment of its privatization, within the solid fuel program, MBS
produces only the “Smederevac” and the famous teachers’-partizan
furnace PG1, an old model of the present “Royal”. Therefore, the
salary arrears and the suppliers’ claims were paid out in the
reorganization period, while the production was modernized. Today this
is a factory that is nice and easy to run. Over the past three years
we introduced 30 new products, we increased the turnover by three
million euros compared to the preceding year, and we owe nobody
anything nor do we have any uncollected claims.

B&F: How do you manage to collect the claims in a situation when
practically everyone is complaining about this problem?

S.Stančić: Our policy to our buyers is very simple, we seek
guarantees. Advance payments, bank guarantees, factoring. It sometimes
happens that a buyer says “but I do business throughout Europe and no
one asks me for so many guarantees”, and our response is that at issue
is not that we do not take their word for it, but that this is what
our business policy is like. We believe in clear rules of business
cooperation because a postponement of the collection of claims would
bring us into a situation to credit our competition.

B&F: Apart from companies, your appliances are also purchased by
physical persons. Is their choice between classic and ecological
stoves influenced more by habits or the paying ability?

S.Stančić: Even my family members ask me “who buys those stoves on
wood?” But the figures are clear – we have standard, good sales in
Serbia, we hold 30 percent of the share on our market where the
cheaper program is mostly sold. Our ambitions are to place even more
expensive appliances in the stores under much more favorable
conditions for the citizens and, thus, to find new buyers. The
stereotype is that stoves on wood are mostly bought by people in
village environments. This is also increasingly an option for saving
energy in urban environments. Central heating is very expensive, and
so is gas. Many households, for example, are connecting to the city
network and to the central heating program, trying to use the existing
installations at their homes and to ensure good, but cheaper heating.

B&F: Is there a similar trend abroad as well?

S.Stančić: Our program is interesting, by definition, to those who
constantly or occasionally live in nature. Since we have buyers from
Bosnia to Chile, and soon, hopefully, in Brazil, Norway and Denmark as
well, the previous experience shows that an increasing degree of the
use of fuel is sought everywhere, as is a modern design and as less
manual work with the appliance as possible. As we export exclusively
under our own brand, it is important to achieve a good ratio between
the quality, price and the design. On more developed markets, also,
increasingly used are appliances on pellet, this being boilers,
furnaces and stoves.

B&F: Where are such products the most in demand?

S.Stančić: The pellet program is in demand the most in Germany, Spain
and France. For example, for French buyers we are developing a product
that is unusable for most of Europe, because the French like to heat
their garden pools and to enjoy them when there is snow. This shows
how ready we are to go further in our development, because
development, a multi-language offer of the assortment on the Internet
and an increase in our market share is the key to survival in our
branch. Also, ecological standards are much stricter abroad, a heating
furnace must be installed by an expert, and attention is paid to the
emission of carbon-monoxide, ashes and dust. That is why furnaces on
pellet are so much in demand there, they are ecological and their use
is stimulated in many European states.

B&F: How would you, in that context, assess the situation in Serbia?

S.Stančić: At the same time, ecological taxes on electrical appliances
are introduced here, and a paradox is that a furnace on pellet,
although ecological, also has electric motors and then we come to the
situation that our buyers are punished because they are paying the ECO
tax on something that is, essentially, an ecological appliance. Also,
almost everywhere in the world buyers have the right to a refund of
the VAT in a considerable percentage if they buy an ecological
appliance, while our Ministry of Environmental Protection is not even
taking this into consideration even though both we and Alfa Plan
indicated several times that such programs already function in the
region and that the European Union itself is requesting that both its
members and candidates for membership support ecological solutions.

B&F: How is the market reacting to the novelties you are introducing
such as, for example, the redesigned “Smederevac”?

S.Stančić: The redesigned model of the “Smederevac-seven” did not
attract buyers only because of its new appearance, but also its
technical characteristics have been improved. It now has a deeper
fire-box, the furnace is of a larger strength, ashes do not fall out
through the door, the oven cooks better. It is, however, a delusion
that it is easy to make a “Smederevac”. That appliance has 77
positions, from the screw to the oven. I learned this upon arriving at
the factory! Today, next to these old lines stand machines for
punching, folding cutting, rolling… We are also intending to buy a
robot for welding and we are developing a mother board for the
software for the pellet program in cooperation with domestic
scientists. A robot would considerably accelerate the production of
boilers for central heating and of pellet programs.

B&F: Since stoves on wood bring little profit, are you considering to
halt the production of the “Smederevac” in the future?

S.Stančić: Never, that is a brand! Last year we redesigned the “seven”
model and this proved to be the right move among buyers. This year it
is the turn to redesign the “nine”. Our goal is to rejuvenate and
improve the technical characteristics, but this must remain a cheap
product, accessible to a broad circle of buyers and no profit can be
made there. We are reducing the share of the old program in the total
production, but no one is thinking of abolishing it. Entire
generations grew up with the “Smederevac” produced by this factory.