The Alfa Plam company of Vranje seems as if it does not belong to the
Serbian economic story. In the first half of the year, this producer
from the metal sector registered an income growth by 19.85%, mostly
thanks to exports whose value increased by 40% compared to the same
period last year. Alfa Plam does not have a single dinar worth of a
credit, nor have they requested financial support from the state
through an anti-crisis package, and this year alone, they invested
around a million euros from their own funds in their own plants. 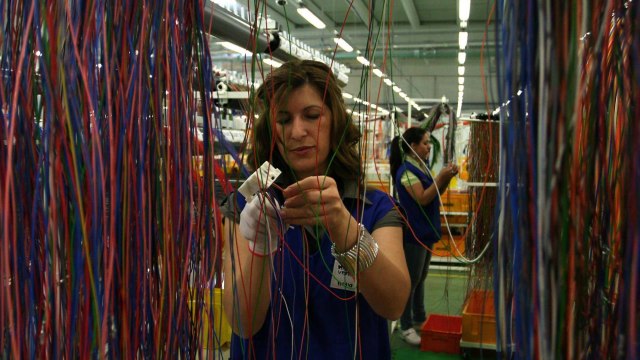 They sell the largest part of their production of cooking stoves,
fireplaces and furnaces in the region and they intend to position
themselves even better on the demanding West European markets. The
answer to the question of how they manage to do this was provided for
the Biznis i Finansije (B&F) magazine by Velin Ilić, the director
general and management board chairman of Alfa Plam.
B&F: How does a company from Serbia manage to do business well in a
situation when even the world’s biggest economies are struggling to
overcome the recession?

Velin Ilić: One could say that we have been doing business in crisis
conditions for decades now, in view of the fact that the crisis
started in these regions in 1989. On the other hand, Nobel Prize
winner Robert Mundell said in Belgrade recently the level which the
world economy reached in 2008 was unattainable in the upcoming period.
In such circumstances we will remain faithful to our business model:
the decision to specialize in the production of heating appliances, to
be totally turned to the needs and desires of our business and
constantly to invest in our production capacities. Alfa Plam had such
an approach already back in the 1960s, when it was the first company
in the former Yugoslavia to produce a furnace that uses oil. A decade
later the oil crisis came, so we reoriented ourselves to furnaces on
gas and wood. Today, it turns out that gas will not be cheap, nor will
its price, ultimately, be stable. Earlier on, Alfa Plam used to sell
even up to 20 thousand furnaces on gas annually, while today there are
not enough buyers even for a tenth of what once used to be sold. It is
clear that consumers are seeking an alternative, and we are able to
offer it. Our program includes furnaces on all the usual fuels, while
for three years now we have also been producing furnaces on pellet.
This is a fuel made of wooden mass with a minimal amount of resin,
with which we are also intending to improve our presence on the West
European market..

B&F: How do buyers decide who is to survive?

V.Ilić: We produce consumer goods, household appliances and for the
middle layer which is able to pay. Such buyers are now increasingly
few, but we are adapting through specialization. Our specialty are
heating devices for individual consumers. Heating is something every
household will always need, and in our regions, regardless of the
climatic changes, the heating season lasts six months and everyone
wants to heat themselves as best as possible and at an as affordable
price as possible. Last year we sold 156 thousand different devices,
mostly in the region where the desires and habits of buyers are
similar: of exceptional importance is for the devices to be of a
multi-purpose nature, for a certain amount of energy sources to serve,
at the same time, for cooking, frying and heating. I believe that also
of importance is both the tradition and the inclination towards “the
specific heat” of such devices, which are sold well in these regions.

B&F: Alfa Plam exports to Italy, Germany, and even to Scandinavia. Are

there any differences in the buyers’ habits?

V.Ilić: Of course there are, but you can still find our products from
Austria to Sweden. In those countries the demand for such devices –
cooking stoves is considerable because a large number of people live
in villages, they have their own firewood, and energy in the West is
expensive. Therefore, out of last year’s 156 thousand different
devices, we exported to Italy, Austria and Germany 12 thousand cooking
stoves and furnaces on pellet, which I believe to be a huge success. A
total of 50 to 60 thousand cooking stoves are sold in Germany
annually, while we manage to sell 4 to 5 thousand, meaning that we
cover 10% of the market. We have managed because we have met all the
technical and aesthetic criteria, which are very high, while, at the
same time, we are competitive price-wise and we ensure the delivery of
the goods in 15 days’ time at the most. On the other hand, the
production for choosy markets has an effect on the overall quality of
our work and on the high motivation of the workers – that every device
must be one hundred percent the same, correct and well made. This also
raises the level of responsibility in each phase, from production,
through the processing and packaging to the transport. That is how one
survives on the market.

B&F: You are one of the rare directors who has said that you will
request no financial assistance from the state for the company. Have
you regretted such a decision in the meantime?

V.Ilić: No (laughter). The fact is that we have discussed this at the
company, but I believe others need that money more, perhaps even under
the influence of the environment we are doing business in. In Vranje,
two big companies have gone to ruin, and while footwear production has
relatively recovered, textile production is still at a standstill.
That is why I thought there are others who could use that money from
the anti-crisis package, while we from Alfa Plam can finance our
business operations ourselves. For 11 years now we have not taken a
single credit, and to the present day we have invested more than 20
million euros worth of our own funds in the modernization of
technology lines and the products themselves. What worries me the
most, however, is the inequality on our market. Either all of us will
pay for electricity, water, taxes and contributions or the few of us
who do pay will no longer be able to endure the burden. Our country
has become non-competitive even by the size of the wages, not because
the salaries are high, but because the contributions are too high. I
believe the state, whose programs of support to the economy have,
nevertheless, produced good results, must put an end to that
injustice.

B&F: Judging by the reactions of businessmen, many fear of even more
negative consequences if a new global recession takes place. How do
you see the future of Alfa Plam?

V.Ilić: We have done what was up to us, and we will continue to do so.
We have always been up-to-date with our products, and we have now
invested a lot in mastering the production of furnaces and cooking
stoves on pellet, and we hope that, by the end of the year, we will
also develop a cooking stove for central heating – the “hydro-stove”.
We know this will not result in larger sales in Serbia and in the
countries of the region, but it will in Italy, Austria and on other
developed markets. This is what we are aspiring towards – to be
present on the West European market and to conquer it with our
knowledge. That is why we have invested so much in the new technology,
and the result is that we have plants of the same technological level
as producers in developed countries. We have improved our
productivity, and we have also managed to improve the working
conditions for our employees. We also dispose of complete
installations for the purification and protection of water and air.
Therefore, Alfa Plam has good prospects not only for surviving, but
also for doing business well in the future, as long as it pays
attention to the needs of the buyers and develops by overcoming
difficulties on the market.